With Distinct Clause, you can return only one of the recurring records as a result when reading data from the table. In other words, if ISTANBUL value is repeated 5 times in a column called province, only one ISTANBUL value will be returned. Let us clarify the subject by making an example.

First, let’s create a table as below and add a few records to this table.

We added 5 records to the table. There are 2 different provinces, 4 different counties in these 5 records. Now let’s query the data in the Province table using the DISTINCT Clause as follows.

All records returned as a result because we read the data with *. Because there are no data sets in which all columns have the same values.

Change the query as follows and run it again. 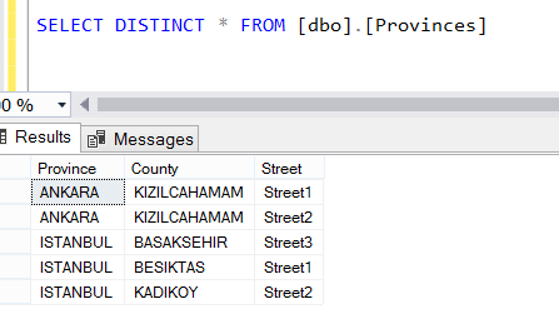 Now with DISTINCT, just read the Province column as follows.

As you might expect, only ANKARA and ISTANBUL have returned as a result because we will only read one of the repeated records.