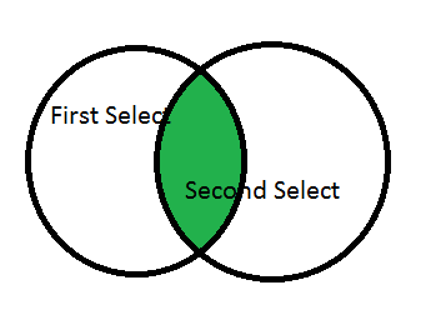 We can use the SQL INTERSECT Operator between two SQL Statement. This operator returns the intersection of the first SQL Statement and the second SQL Statement as a result. This allows TSQL code developers to simplify their work in some cases.

First, we create two tables and we add a few records to these tables.

Then, using the INTERSECT operator, we find the intersection of the two tables.

If the column numbers in the two SQL Statement are different, you will get an error as follows.

Let’s detail our example a little more. Let’s add a column named typeofint to both tables by running the following script. One of the column’s type is varchar (50), the other column’s type is int. And let’s update two tables as follows.

Rewrite the INTERSECT query as follows:

Although the names of the two columns are the same, we will get the error as follows because the data types are different.

Conversion failed when converting the varchar value ‘A’ to data type int.

This time we will add two columns of the same data type with different names and update these columns with some data.

Rewrite the INTERSECT query as follows:

As you can see, although the names are different, we did not receive any errors because the data types are the same.

We are a team with over 10 years of database management and BI experience. Our Expertises: Oracle, SQL Server, PostgreSQL, MySQL, MongoDB, Elasticsearch, Kibana, Grafana.
Previous Querying information about Exadata cellnode
Next How To Delete the Last Character of a String in TSQL(DATALENGTH and LEFT Functions)