HAVING Clause in SQL Server and Difference Between WHERE Clause(TSQL)

Let’s remember the example in the article about Group By.

First, we create a table with the help of the following script and add a few records into this table.

We group the data by ProductName and calculate the total price of the products in the same group with the following query.

By filtering the above query with HAVING Clause, we return the groups with the SUM (ProductPrice) value below than 10000 as a result.

Using the HAVING Clause as in the example above, we can filter out groups that are grouped by GROUP By.

WHERE Clause and HAVING Clause in same SQL Statement:

We can use WHERE Clause and HAVING Clause in the same SQL Statement. The following example first reads data from the records in the table that has a ProductPrice value below 6800. This result set is then grouped according to ProductName. Lastly, it returns the groups with the SUM (ProductPrice) value below than 10000 as a result by filtering this result set with HAVING Clause.

To see all records in the table, we read the entire table first. 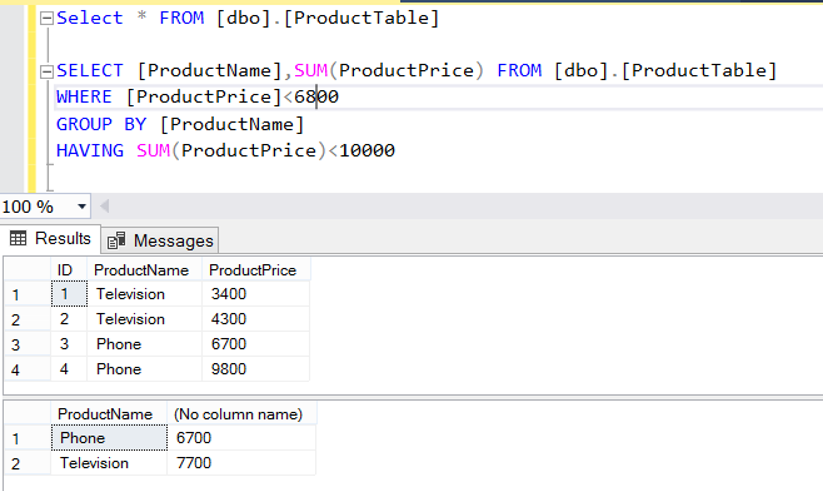 Previous ORA-01426 numeric overflow Error When Trying to get backup with Expdp
Next How To Encrypt SQL Server Stored Procedures, Views and Functions