Why you need to choose mongodb over other databases?

In the recent times i have come across various perople asking why do we need to adopt MongoDB as a database service.So in this blog post we are going to discuss about the answer to many untold questions.NoSQL means Not Only SQL. It is not a relational database they have a simple and flexible structure. They are typically used in very large databases, which are particularly prone toperformance problems caused by the limitations of SQL and the relational model of databases.

MongoDB is the most well known among NoSQL Databases. It has a rich document based queries for easy readability.It provides Full index support for high performance in applications. Data is always available by replication &amp; scalable by sharding. 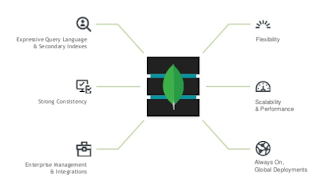 Storing data is a document data model, where each record and its associated data is thought of as a “document”. In a document database, everything related to a database object is encapsulated together. A database can have zero or more collections. A collection shares enough in common with a traditional table that you can safely think of the two as the same thing. Collections are made up of zero or more documents. A document is made up of one or more fields, which is like a key-value pair.MongoDB is a JSON-style data store.If you are a software developer &amp; worried much about the database management then time to  switch to MongoDB which much much more developer friendly.

This is an important feature in MongoDB that is not present in the relational databases. In a schema-less DB, you can simply add records without any previous structure. Moreover, you can group records that do not have the same structure, for example, you can have a collection (something like a table on relational databases where you group records) with records of various structures, in other words, they do not need to have the same columns (properties).

In MongoDB, the application’s working set must fit into the available physical memory. MongoDB uses a locking system to ensure dataset consistency. If certain operations are long-running or a queue forms, performance will degrade as requests and operations wait for the lock. Database Profiling enables to trace out the slow performing queries &amp; helps for better performance by tuning them.

Database systems with large data sets or high throughput applications can challenge the capacity of a single server.MongoDB helps in distributing the data across various machine by the process called Sharding. It is the process of storing data records across multiple machines.It solves data size problems with horizontal scaling. The advantage in sharding is to add the machines easily to support the data growth.So probably for any company that is growing in business as well as data youy need not care about scaling the data.

MongoDB provides various security features such as authentication, access control, encryption, to secure your MongoDB deployments. Authentication is the process of verifying the identity of a client. For replication, it allows a key file access control.MongoDB Enterprise supports querying an LDAP server for the LDAP groups to which the authenticated user belongs.Starting in version 4.0 MongoDB supports Salted Challenge Response Authentication Mechanism (SCRAM) which is the default authentication mechanism for MongoDB.So when it comes to secutiry we are damn high secured.

Aggregation is similar to the group by operation in the relation DBMS. In MongoDB applications, we can group various collections with different schema to process the desired output. Aggregation framework involves the concept of data processing pipelines. Documents enter a multi-stage pipeline that transforms the documents into an aggregated result.This has been a great feature where people run various report queries in a very simple manner.

The driver handles all interaction with the database in a language appropriate to the application.MongoDB mostly supports all kind of languages and has dedicated drivers &amp; complete support from the MongoDB community.So you can just work on your applications &amp; need not care about the rest.

One of the reasons that many people choose relational databases over non-relational is because of the ACID property.MongoDB version 4.0 supports multi-document ACID transactions. Being schema-free data model MongoDB has been widely used &amp; now supporting ACID transaction will make it more special.

Thus before deciding what type of database service to choose its much neccessary that what are all the business logic that are needed for implementing applications.Hence now you must arrive at a decision that why you are choosing/have choosen MongoDB as a database service.Do let me know through the comments section that which feature in MongoDB drove you to choosing it over others.