We can combine more than one table through equi-columns in tables and perform joins in a single result set.

There are a few kinds of join types. The result set will be changed according to the Join type used.

Let’s go over an example to understand the subject clearly.

The following script will create two tables and add some records into it.

One of the tables will be a “City” table and city names will be listed. The other table will include the city’s famous food.

As you can see in the Script, there is a column named “CityID” in the “FamousFood” table.

We will use these two columns to join these two tables. When writing scripts with TSQL, we can use the following join types.

The following screenshot makes it easier to understand how join types join tables. 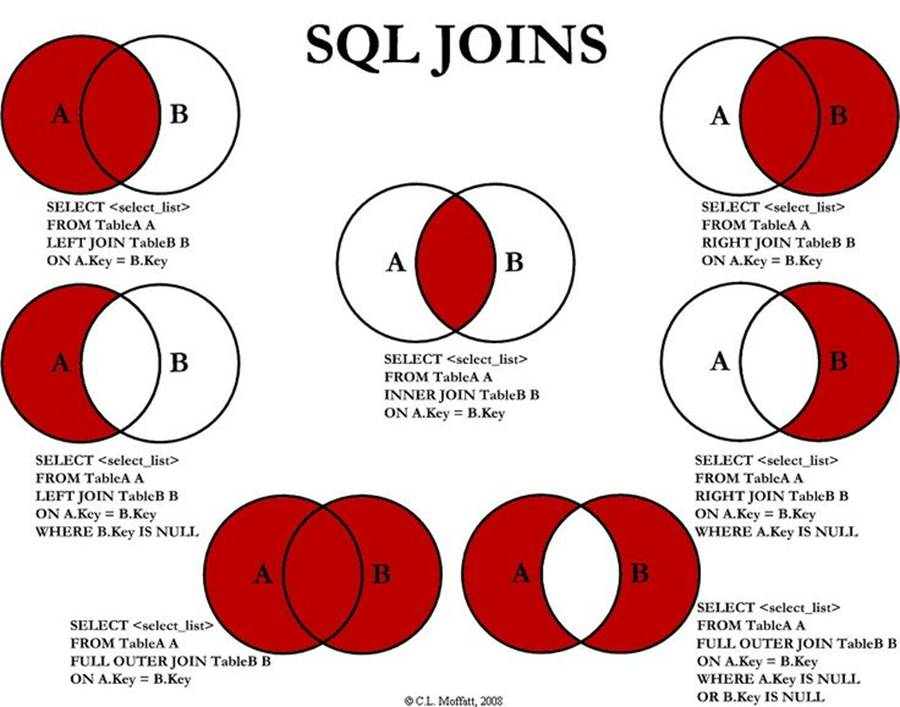 You can find the details of the join types I have listed below.

This type of join joins the common records of the two tables.

We can join two tables we created at the beginning of the article with inner join as follows. 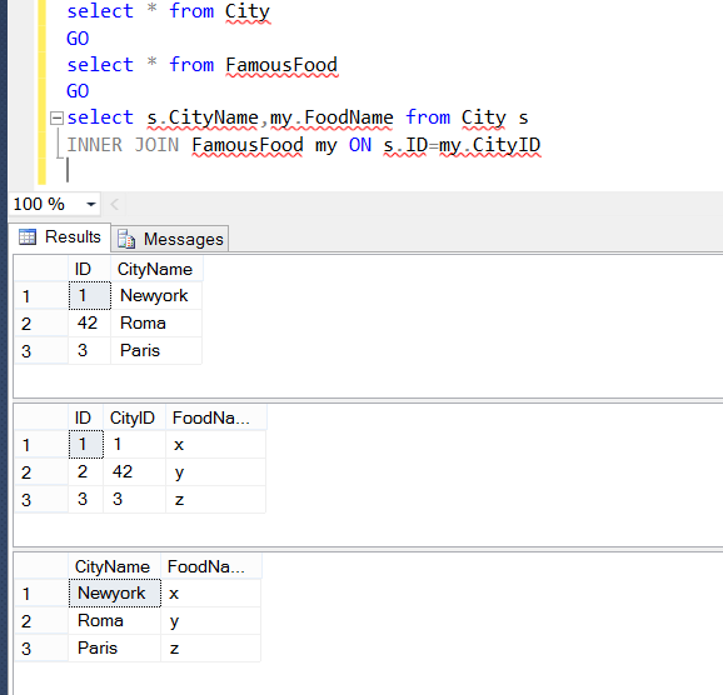 If we add a record to the “City” table and If we do not add the famous food of this city to the “FamousFood” table, this record will not be in the result set of the join process.

To test, we will add a record to the “City” table, but we will not add the famous food of the city to the “FamousFood” table.

When we re-run the INNER JOIN script that we just ran, we will not see a record of Hongkong as you see.

This way you can write your scripts more clearly.

As you can see in the script below, if we have defined an alias, we need to use the alias to select the columns we need.

Another goal of Alias ​​is that if two tables have columns with the same name and the name of the column is entered directly in select without specifying the alias, you will get an error like this:

The error we get when we try to select the ID column with the same name in our query without Alias:

Like INNER JOIN, it uses common columns between tables to join common records.

Unlike INNER JOIN, non-matching rows also can be in result set. You can not use the OUTER JOIN alone by typing OUTER JOIN.

For example, in the example we wrote an INNER JOIN, we inserted Hongkong in the “City” table.

But since we did not insert a record about Hongkong in the “FamousFood” table, it was not listed in INNER JOIN.

As you can see below, the value of Hongkong returned in the result set and the “FoodName” column in the “FamousFood” table was null because there was no record. 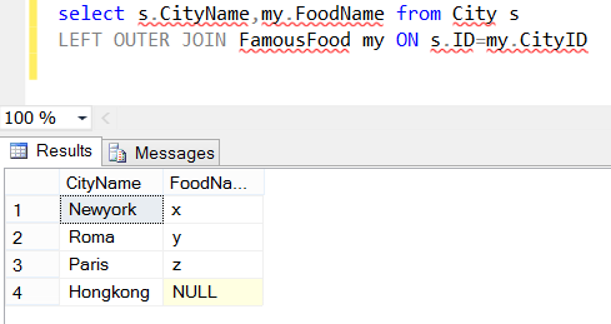 You can meet your different needs by filtering this query in the where condition.

For example, if we want to list cities which has not famous food, we can write the following query.

It works the same logic as LEFT OUTER JOIN. This time, all the records in the second table returns.

Records that do not correspond in the first table are returned as null.

As you can see in the screenshot below, there is no record of null for “CityName”.

Because all of the values ​​in the “CityID” column in the “FamousFood” table are in the “ID” column of the “City” table.

I will add a record to the “FamousFood” table with the following script.

And let’s say this record is 16 for “CityID”. The record we will insert will be Bursa’s Iskender.

But we will not add Bursa to the “City” table.

We see the value of Iskender as you see below.

However, since there is no City associated with Iskender on the “City” table, the “CityName” column is null.

All records in the two tables are returns. But the columns that do not correspond returns empty.

As you see below,

The value of Hongkong came, but the food came null

The value of Iskender came, but the city came null 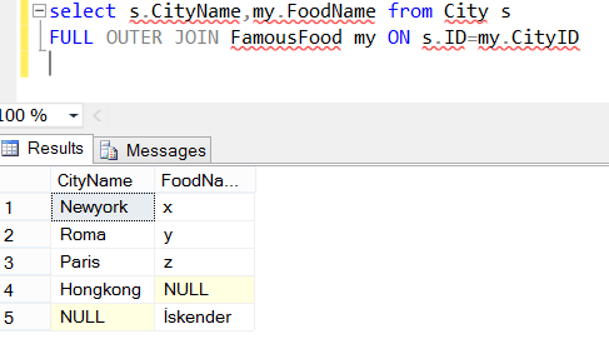 I think you can understand better by writing your query and looking at the result in the following way. 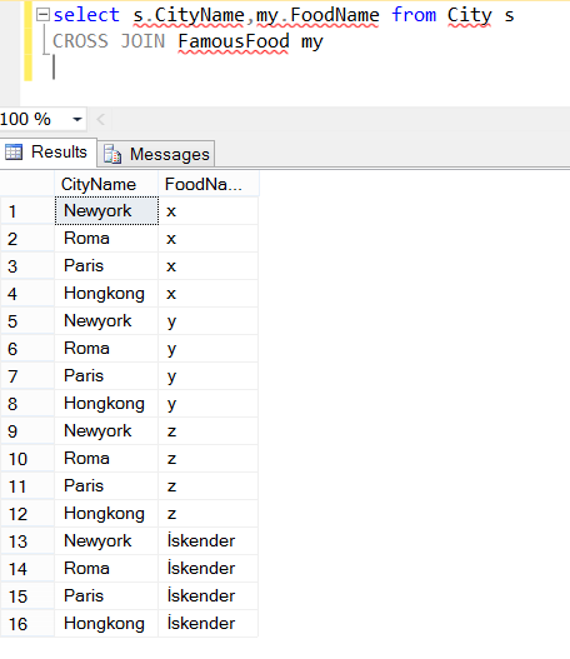 If we write the expression we write in the ON statement in the INNER JOIN, in the where block of the CROSS JOIN, it will work like an INNER JOIN.

When you run the following script, you will see that the CROSS JOIN with the WHERE appended, returns the same result as the INNER JOIN. 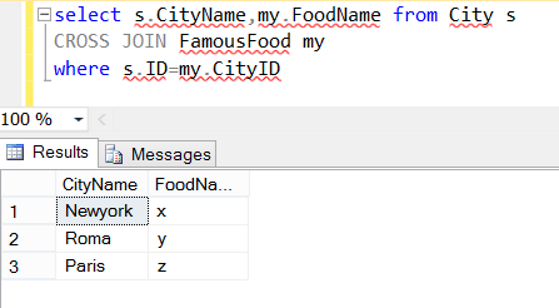 After this article, you may want to read the article titled “JOIN Types in SQL Server Execution Plan“.

We are a team with over 10 years of database management and BI experience. Our Expertises: Oracle, SQL Server, PostgreSQL, MySQL, MongoDB, Elasticsearch, Kibana, Grafana.
Previous How To Create Oracle Profiles
Next How To Create Database On PostgreSQL