In this article, we will examine the join types in the execution plan.

SQL Server converts the JOIN expressions written in TSQL to the following join types in the background.

While performing this conversion, it will execute the query in the following join types, which will work better.

First we will explain the concepts above. We will then use the queries in the topic “Join Types in SQL Server” to create examples.

And we’ll add indexes to some columns to make the query work better.

After adding an index, we will see how the join process (nested loop, merge, hash) in the background changes.

If one of the tables is small and the other is large and the large table has an index in the join column, then this join type will work very well. The following picture will be a good example for you to understand the logic of Nested Loop Join.

If there is an index on the join column of the table marked as outer, it will work very well. 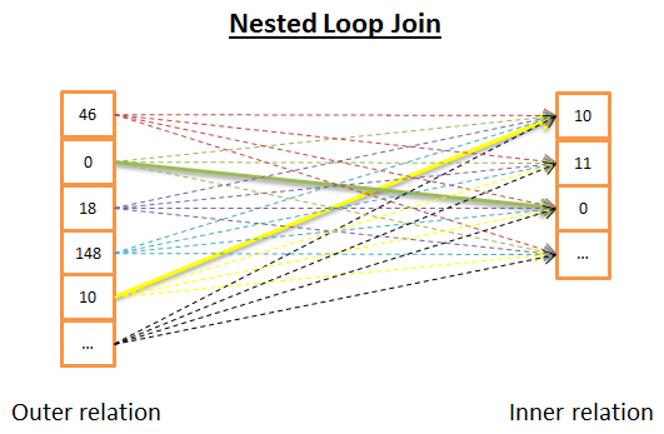 Let’s go through a sample,

Consider a join as follows.

In column a in the first table there is an index in ordered structure,

In column b in the secondary table there is an index in ordered structure too.

As a result of such a join, merge join will work very well because both of the columns to be joined are in ordered structure.

Merge Join compares two columns in a join with these two columns, and if it is equal, it returns the result.

The type of join we do not like. We do not want to see in the execution plan.

If large, unordered, and non-indexed tables enter the join process, SQL Server will have to use the HASH JOIN method to join these two tables.

A hash table is created in the memory by taking the smallest of the two tables.

Below you can find the image showing the hash join. 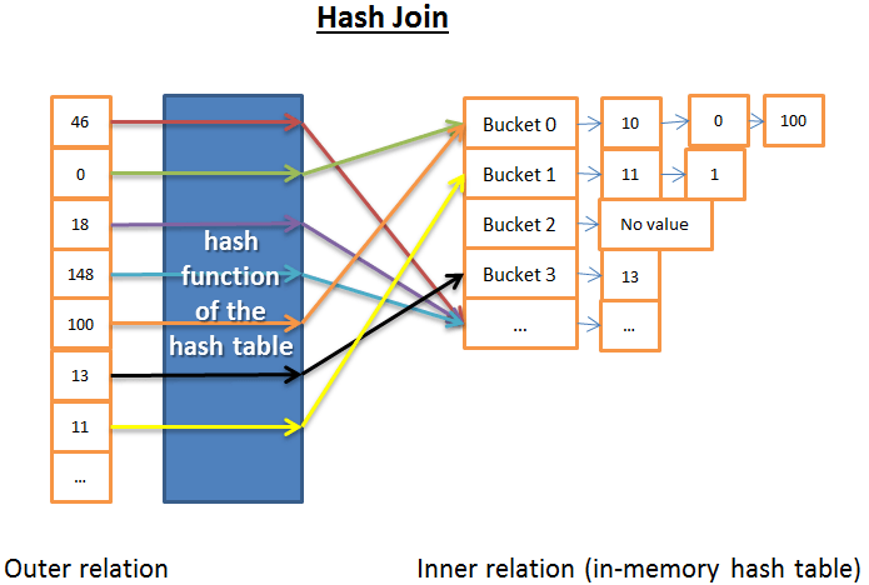 Which of these join methods is more efficient?

When we told Hash join, we said we do not like this join type.

Let’s illustrate how we can convert a hash join to other join types. I will proceed using queries from my previous article, “Join Types in SQL Server“.

Next, let’s look at how to create the estimated execution plan without running the query by clicking on the Display Estimated Execution plan as shown in the picture below.

Let’s run the same script again by adding an index to the join column. For example, add the index to the CityID column in the FamousFood table using the following script.

After adding our index, let’s look at the estimated execution plan just as we did before.

First, in the FamousFood table we have index seek from the index named IX_CityID (It goes to the index and finds records that it searched for without searching all of the index)

Later, it made a table scan (It goes to the index and finds records that it searched for with scanning all of the index) from the City table and concatenated the two results with Nested Loop method,

Since there is no Clustered Index in the FamousFood table,Sql server uses row id from index named IX_CityID to do RID Lookup and brings the other columns from the table.

Finally, the results from the previous join and RID Lookup are combined with the Nested Loops join type to produce the result.

What is RID Lookup ?,

What is Clustered Index?,

What are the differences between Clustered and NonClustered Indexes?

The answers to your questions can be found in the following articles.

“Statistics Concept and Performance Effect on SQL Server“,(Scan, seek operations have been examined in detail in this article.)

Let’s put a Clustered Index on the FamousFood table with the following script and then look at the execution plan again.

Looking back at the execution plan, Key Lookup came in instead of RID Lookup as follows.

I would prefer to place the Clustered Index in this example because the ID column is the determinative column for the Cities table.

As you can see below, the table scan for the City table returned to the Clustered Index seek.

As you remember the previous execution plan, the sql server first performs index seek, then join, then key lookup, and then join again.

Instead, it decided that the cost of the Clustered Index Scan + single join process was less.

Of course, the number of columns in the table, the size of the data can change the sql server’s decision.

After running the script, I see that the clustered index scan process is still on the execution plan.

Let’s add a few columns to the FamousFood table and fill these columns with meaningless values.

Then we will insert the table to enlarge the table.

Let’s run the following script to set the value of the ID column to auto-increment before doing the Insert operation.

Then we will I add  records to our table using the following script. You can run the script for 1 minute.

Once we stop the script, let’s look at the execution plan again.

SQL Server did not choose to use the nonclustered index we created in the FamousFood table when the number of rows (data density) in the table was low.

Since the table is small, it has been estimated that it would be less costly to bring the data over the clustered index.

But once the data in the table grows, it chose to use the index to cover our query (an index that contains the columns of the select and where expressions).

Another point that attracts our attention is Merge Join.

It did not use merge join before.

When we look at the execution plan below;

ClusteredIndexScan was made using the index named IX_Clustered of the City table. IX_Clustered index has an ID column.

When the table grows, it performs merge join on the ordered columns (with index).

As you can see, there can be hash join, nested loop or merge join on the same query, based on index and number of records in the table.

Can we convert these operations to Clustered Index Seek and Index Seek?

Because the result set of the join process is getting almost all the rows.

By filtering the query as follows, the execution plan will return to index seek and clustered index seek.

In the article “Spool Concept in Execution Plan(Eager Spool, Lazy Spool)” we will continue to enter the details of the execution plan.

You can reach our articles by searching for words that contain the subject you are interested.

What are the differences between Index Scan and Index Seek?

What are the differences between RID Lookup and KeyLookup?

The answers to these questions can be found in the article titled “Statistics Concept and Performance Effect on SQL Server“.